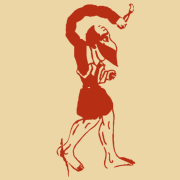 «In the cabaret of globalisation, the state performs a striptease, at the end of which it is left wearing the minimum necessary: its powers of repression… the nation state increasingly becomes a mere security apparatus in the service of the mega-enterprises which neoliberalism is constructing. Instead of orienting public investment towards social spending, it prefers to improve the equipment which enables it to control society more effectively.»

The Seven Loose Pieces of the Global Jigsaw Puzzle: Neoliberalism as a puzzle: the useless global unity which fragments and destroys nationsby Subcomandante Insurgente Marcos Zapatista Army of National LiberationJune 1997

“This image of Syntagma Square is unacceptable. Athens cannot be transformed into a “karagoz berde*”

At the “Saray*” (Ottoman palace) they took the decision to sell out
But before selling out, they will lay off
They say, they want to set up rightful businesses
Foreign and local investors are pushing them
(in order)To persuade us, the started politely
-the “bosses” are 30 families-
And a fat man whom they are using for propagating
came to the frontline to coordinate the fraud
They started with tricks –as if we are stupid-
In the restaurant –they say- we were “eating together”
They had set up the grand fiesta
And they were not leaving us “hungry” either (they say)
And now that the bill eventually came
It is both right and appropriate for the people to pay
Their announcers also went out to assist
-in an effort to get a part of the pie as well-
“The celebration must come to an end now!”, they say,
They were doing us a favor, for as long as it lasted
In the restaurant, they will only be organizing soiree’s
And they will transform it, from a shanty-house into a cabaret…

Tell me, are they happy in the Saray,
now that the “karagoz berde” is down?
It won’t spoil the(ir) view anymore
And please tell me, are the tourists OK now?
Are our assessments correct?
Now that you have put an order
in the cabaret “La belle Grece” ?

We said fine, let’s give them a hand
We didn’t suspect –though it was obvious- the fraud
And they immediately set off
to set up hangmans in our size
You gotta realize my family-men
this show has *and Viziers*
Viziers’ daughters and sons, and also Bey’s*
Criers, but also Arkoudeides (famous police chief of the past)
So it was, and when the jokes were over
We went to the Square and set up a tent
To get together, to discuss, to live
and –after voting- to decide
And they immediately sent Veligekas*
To spray us with chemicals and MEGA-propaganda
And somewhere there, between cops and beatings
we got a dog for our shanty-house
And in this roma-camp of ours,
They ‘ll never manage to sell Loukanikos*
And whenever the crooks enter the Saray
He raises on leg and pisses on them

* Karagoz Berde: The screen of the Shadow-Theater, famous public theater of Turkey and Greece.
* The Saray is the Ottoman palace, in this song referring to the Parliament.
* Sultans, Viziers, Bey’s, Veligekas and Criers are all heroes of the Shadow-theater that in Greece we shortly call “Karagozis”, from the name of the main hero. The Sultan was the Ottoman ruler. The Vizier, the political advisor or minister in Islamic government. The Bey is the leader of the tribe.
* Veligekas in the shadow-theater, is the personal guard of the ruler, responsible for imposing law and order.
* Loukanikos, the dog-symbol of the Greek mobilizations.

Not found any items