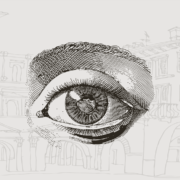 You know I think I‘ve seen you before
Don’t ask me when and where, I don’t remember
Yet we’ve met many times, since I was a kid
And I am not afraid of you anymore

You were a lyric of a poet of the past century
A minore of the Dawn, in Copenhagen a mermaid
For you left the three-sailed ships
You were an empty shirt, and Helen of Troy

But I also know you from somewhere else
I think I saw with the knife on your neck before it blowed in Avlis
In the greatest happiness, in the deepest sorrow
By the side of Marc Anthony when god was abandoning him

You were Salome holding John’s head on the dish
And my heart that is beating from the bottom and on the left
A shepherd’s song in the mountains of Anogia
A red prostitute, in Hussain’s paintings in Lahore

We saw together a dawn in Casablanca
You know Ingrid, me and you will always have Paris
Don’t ask me to tell you, I remember no more
Just shut lips, and two big eyes

You know I think I‘ve seen you before
Don’t ask me when and where, I don’t remember
Yet we’ve met many times, since I was a kid
And I am not afraid of you anymore

In Cartagena and in old Verona
In the stars, the sea, the Earth and the moon
In Capuleto’s ancient neighborhood
Big eyes, oyster with pearl

You were the old memories in the remnants of a day
In Cartagena you were love in the times of Cholera
In my old school, at the last desk
A hidden dedication in a book page

I took in my first guard-post all your marks
I used to see you in the shooting camp and I was targeting your eyes
You were scattered moments that later were put in order
Our last time, had something of the first

In Thebes you were renowned for your smile
You are the Sphinx and I still haven’t resolve your Enigma
You were a look in a rush, and a soft touch
And that “I’ll go even if it is for the worse”

You were a train that left and you can’t catch anymore
And “Say goodbye to her, to the Alexandria you are missing”
They are singing you in Mexico, and they are dancing you in Cuba
Marques transformed you into a novel and Neruda into a poem

And me, that I had never written a love song,
I put you in some scattered lyrics
But now I’ve become too cheeky, so I won’t say the rest
I will only mention two shut lips, and two big eyes