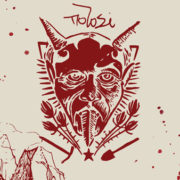 Potosi, argues Galeano, used to be one of the most important and most densely populated cities on earth. It had the same more or less population with London, bigger than that of Madrid or Sevilla. “Vale un Potosi”- “It is worth an entire Potosi” say the Spaniards for worthy objects till today. It is said that with the silver that was extracted from Cerro Rico and was sent to Europe, there could be built a silver bridge that could connect Potosi with Madrid. However, the silver miners were dying young. Today Potosi is a ghost-city. The silver is gone and the old grandeurs hav faded away. The miners in the silver mines are still looking for little pieces of silver. They die before they reach their 45th year of age.

I saw a strange dream on Sunday
I was at old Potosi
at some 4,000 meters of altitude
Tell me what I was looking for over there?
At the old Virreinato of Peru
Before becoming today’s Bolivia
Mamitas and papachos of the old times
were bowing, silently and that’s not a joke
And under the shadow of Cerro Rico
Playing that game with the beads
In silver streets and cells lightless
They were talking about the mountain that eats the men
It is hiding the devil inside it they were whispering
Here, us the indigenous, we call him Tio
And instead of the inconvenient paradise of the Spaniards
we prefer hell and the mine
Conquistadors, feudal lords and artists,
In the churches priests, believers and seekers
Silver, prostitutes, adventurers
in the clubs the gamblers were gambling their lives

And then I found myself at the modern
Potosi of poverty and distress
Here muchacho “ya, no hay plata” were shouting at me
in the mines of Death and misery
In the -once- big city
the glories and riches had faded away
and only some gringos were left admiring
the paintings of Melchor Pérez Holguín
The adventurers have now gone away
But in the mines the miners still die early
the prostitutes and the priests have migrated
And neither a grain silver will no longer be found there
but that whole story reminded me
something of the fate of silver and gold
And when the Cathedral’s bell rang
It sounded like the church of Ierissos*
My dream fooled me very well today
-I swear, i won’t drink again on a Sunday-
With a magic as well as cunning trick
I slept in Potosi and I woke up in Chalkidiki*
*Chalkidiki, Ierissos: areas of Northern Greece where a Canadian mining company has installed a gold mine against the will of the locals. The mine has already destroyed the area’s forests, an d will keep doing so for many years to come.

It will be changed by us

What else can I do