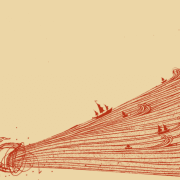 I feel tied in the middle sail
The game is set and the team crap
The journey is old and last for centuries
And you, a siren screaming from the screens
You wanna persuade me that ‘my friend it’s all right’
Sit comfortably on your couch
You ‘ve turned stupification into my first nature
For me to miss out that you’ve torn my sails
And you were a team of Beos*, a ship of Papandreou*
The latest loan we got once again
The threat and the ghost of unemployment
And an undercover cop who sneaked into (Villa) Amalias
A family man at night, at home, in front of the screen
You were the empty head of the Golden Dawn fanatic
A boss that is looking for slaves in his job
A journalist that is working for his bosses

You were trembling like a fish in the court case of Kasidiaris*
You were a CO2 mist in Athens blocking me the moon
A fired worker of Rizospastis on behalf of Perissos*
And a gas bomb into the school of Ierissos*
The state monopoly on violence
And that corruption of power
The political parties screaming for me to vote for them
And the elections that do not change the world
You seem to me like the idiot’s revenge
Screaming for the race and the blood
You were the knife in Ifigenia’s neck
And the populist, vote-hunting blocking of the citizenship (law)
The oligarchs that own Greece
And my friends who don’t even have a job
Because the system is unfair, no more jokes
We are pawn of capitalism stupid!

* Achileas Beos is a football team owner convicted for setting games.
* When Giorgos Papandreou put Greece in Troika’s hands, he said that “our ship is destroyed and needs to be repaired in the safe harbor (of the Troika)”
* Kasidiaris is Golden Dawn’s spokesman, accused of beating up a student a few years ago. Went through trial, the court full of GD members, and the judge –sitting his pants- found him innocent.
* A reference to the workers fired by KKE’s newspaper ‘Rizospastis’
* The town in Hakidiki resisting the destruction of their forests by a Canadian mining company. To protect the company’s interests, the government of Greece sent the police to suppress the anti-mining movement –throwing, among other atrocities, tear-gas inside the town’s school.