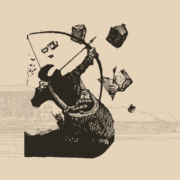 I’ve set my lyrics free and they roam around
And there are also some friends that believe in me
One of them, win the trophy of the country’s biggest shame
And two of them are bad bad loopologists
An old-school hiphop-er that is now being dressed differently
And some pals of mine who would listen to my songs anyways
Another one that was pushing me to continue when I had given up
And some others who believed in me more than myself even
Musicians who transformed my sounds into notes and music
And a lowbapper that I caught mumbling lyrics of mine
My generation, lost in the big city
In Cabezon, all the cooks and the waitors
A couple of crazy photographers in Thessalonica
Who had put the crisis into a 35mm film
There are many people who believe in me
And so my lyrics are not afraid when they roam around

I’ve set my lyrics free and they roam around
And there are some comrades who believe in me
They put me on the cinema, and prose in theater
In Alexanderplatz, in Berlin, “Red Rosa”
They are everywhere, they ping me, they don’t let me relax
From Megali Panayia to Aperathou in Naxos
In Giannena and Chania, winter and summer
Even in Mexico, in a rebels’ hideout
And then they go even further, with the rain, with the wind
They give a push and this globe starts spinning around
They move on and they go, they have no nations and castes
They are my comrades, refugees and migrants
They are holding as their flag, the Social Waste t-shirt
And I don’t even know how far a lyric can go
And the refrens and the couples, where are they travelling to?
I have set my lyrics free and they roam around