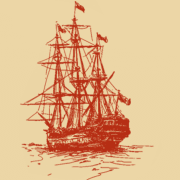 Harbors
Eternal spaces of reunion and separation. Personal, beloved harbors- Thessaloniki, Piraeus, the Great Castle of the Mediterranean, Casablanca. Harbors of poetry and literature- Kavafy’s Alexandria, Izzo’s Marseilles, and Kavvadias’ Colombo. Harbors of lovers, spices, music- Lisbon, Algiers, and Cesaria’s Capo Verde. Harbors of the “ballet of the working class”- Buenos Aires’ Boca, and the team-symbol of Catalunya. Harbors of fiction- Hugo Pratt’s and Corto Maltese’s Escondida, and the Flying Dutchman. Harbors of poverty- my friends’ Karachi – against the Golden Dawn’s neonazis – and Mogadishu. Harbors of Utopia.

The lyrics about Thessaloniki, Willy, Nagel Harbor, are -obviously- references to the work of Nikos Kavvadias.

I will board a ship, a big ship
And when I let myself free
I am gonna fight against Poseidon and St. Nicholas
And I‘ll travel the world’s harbors

I am gonna leave from Thessaloniki at night
-do not ever dare to view her from the land-
And a shirt with gold on the sleeve,
I will leave behind me somewhere in Kalamaria

I will head, through Piraeus, towards Crete
Khandakas, Chora, Candia, Great Castle,
And I‘ll keep asking the old-Aposperites
Where this star of the south is hidden

And thenafter, southern Libyan sea
And after asking permission with a wine-toast
From an old-pirate ship
I will let myself reach charming Alexandria

And from there, with light-speed
That emerges from the ancient lost Lighthouse
On the search of the scent of some woman
I will sail to the port of Marseilles

I am gonna drink French champagne, wine, and beer
And when the night starts throwing her veils
I will escape the multitude
Setting my direction towards Catalunya, Barcelona

I am gonna enter the city like a trophy-bearing St. Jordi
I will head towards the Ramblas and Barceloneta
And with a yellow and red flag
I will pay do my homeage at Mont Juic and Camp Nou

With the wind I will travel to Maghreb
Arab sight, and Berber’s blood
In Casablanka I will spend a night
And in the Kasbah I will look for Fatima, in vain

I will cross the Atlantic’s waters
Will say farewell to the land at Capo Verde
And in the harbor that the Left often visits
I will set my anchor for a while, Porto Alegre

Blue and yellow I am gonna paint my sails
-the flame will be burning in the spermaceti-
Buenos Aires, colorful neighborhood
And Boca juniors “es un sentimiento”

And then, in the seafarers’ steps
Full of rum, I will raise the glass
Flying Dutchman, eternally struggling with the waves
Outside Hope’s Cape

And there, in the poverty’s waters, hold on tight from the ropes
Somalian Pirates are expecting us in Mogadishu
Further from Aden, and many of them may belong
To Willy’s, the black stoker’s, tribe

We’ll stop for a while in Karachi, where I have friends
We’ll ignore the sharks of the Indian Ocean
Passing from Colombo, we’ll signal to Hagel Harbor
It is sure, we‘ll find ourselves in Escondida

And when the hours, typhoons, storms, and rainfalls pass
We’ll head for unexplored lands
And from a corner of the sky, Kavvadias will be secretly smiling
While the island of utopia will be distancing itself

I will board a ship, a big ship
And when I let myself free
I am gonna fight against Poseidon and St. Nicholas
And I ‘ll travel the world’s harbors